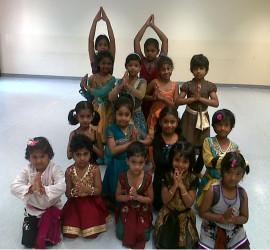 Arangetram and Launch of Naatyaanjali

After 7 years of conducting Bharathanatyam classes and performances, Naatyaanjali (Offering the Arts) was officially launched by Mr. Vikram Nair. 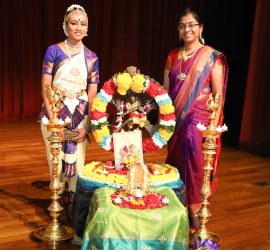 Naatyaanjali (Offering the Arts) is a Bharathanatyam Dance School in Singapore that aims to share the beauty of Bharathanatyam (Indian Classical Dance), mould and shape individuals (males and females aged 3 and above) in this fine art. In line with the changing times and tastes, Naatyaanjali also aims to explore new dance forms, moves and gestures and incorporate them into our choreography.

Behind Naatyaanjali, the Bharathanatyam Dance School

Jeyanthi fell in love with this Art 31 years ago. She commenced her journey in Bharathanatyam under the tutelage of Mrs Neila Sathyalingam (Apsaras Arts). She continued blossoming under the tutelage of Mrs Santha Bhaskar (Bhaskar’s Arts Academy, Nrityalaya Aesthetics Society). She has performed extensively in Nrityalaya’s productions with the recent Chakra staged in Bangalore and Singapore in 2011 and 2012 respectively. She also represented Nrityalaya in its Ramayana tour to Chennai, Ayodhya, Orissa and Delhi and Manohra in Chennai. She is also trained in Kuchipudi.

Endowed with netraabhinaya (expression through the eyes) and an expressive face, she naturally evokes remarkable rasas and amazing abinaya. Her training in carnatic music further enhances her appreciation of the nuances in a dance piece.

Loving to do charity through dance, she staged Kaavyarasa for TRC Multi-Purpose Co-operative Society Ltd‘s Bursary Scheme and Singapore Ceylon Tamil Association’s Music and Dance Academy in 2004 and Sankalana for Hindu Centre‘s mitra program in 2006 to resounding successes. For her efforts, she was recognised as a Distinguished Friend of the Cooperative. She has also choreographed winning solo pieces for dance competitions in Darwin. Recognising her talents, she was invited by the Northern Territory Department of Chief Minister Multicultural Affairs in Darwin, Australia in collaboration with the Hindu Society of the Northern Territory, to choreograph for and teach Australian teens. Thereafter, a sell-out fund raising performance Aham was staged in Oct 2011.

Naatyaanjali (Offering the Arts) wishes Jeyanthi well and hopes she will steer the Bharathanatyam Dance School to greater heights!

Drop us a note at our website or contact us at [email protected] if you would like to find out more about us or collaborate with us!

No tags for this post.
We use cookies on our website to give you the most relevant experience by remembering your preferences and repeat visits. By clicking “Accept”, you consent to the use of ALL the cookies.
Do not sell my personal information.
Cookie SettingsAccept
Manage consent