Skip to content
Home » Arangetram and Launch of Naatyaanjali

Arangetram and Launch of Naatyaanjali

An arangetram is an on-stage performance of a student after undertaking several years of training. Aranga means raised stage and etram means climbing thus Arangetram literally means climbing the stage. This thus represents the graduation ceremony when the pupil is presented to the public. 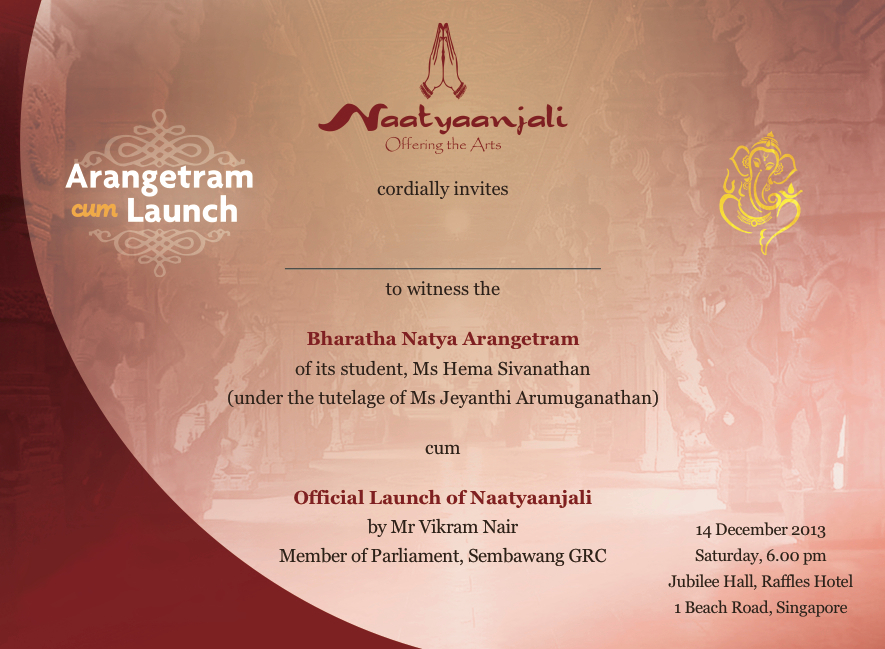 First, there were 9 expressive, colourful and vibrant Bharatha Natyam dance pieces presented by Ms Hema Sivanathan and choreographed by Ms Jeyanthi Arumuganathan. The items were:

Thank you speech with family

Naatyaanjali (Offering the Arts) was officially launched by Mr Vikram Nair at the completion of all 9 items.

Before the launch, students of Naatyaanjali walked in with the Anjali mudra (which signifies offering) to a composition written by Tamil Poet Kaaviyan Muthuthaasan, Mr P Wigneshwaran and composed by Mr Ghanavenothan Retnam. Mr Nair did the honours by unveiling the Naatyaanjali plaque.

The completion of Hema’s Arangetram was marked by Naatyaanjali presenting Hema with her Certificate of Achievement.  Congratulations Hema! You fulfilled your dad’s dream of your Arangetram against all odds.

4. Charity was not forgotten

Wherever possible, Naatyaanjali would incorporate a “help others” element into our activities. We did that this time too. We sourced for donations to benefit Handicaps Welfare Association. We succeeded by collecting $1,263.20!

14 Dec 2013 marked a very significant milestone in the history of Naatyaanjali and in Hema’s life.

We use cookies on our website to give you the most relevant experience by remembering your preferences and repeat visits. By clicking “Accept”, you consent to the use of ALL the cookies.
Do not sell my personal information.
Cookie SettingsAccept
Manage consent